An idea for capturing CO2 & storing
heat under your new house

Question: “Is it a good idea or barmy?”

A heat store to capture CO2

The mineral olivine is taken as the example for this note. It absorbs CO2 slowly at ambient temperature (25°C) but much faster at a temperature of 186°C.

Suggested target is to use 2 tonnes of biomass per year, to sequester a substantial proportion of the 2.75 tonnes CO2 produced at a high(ish) temperature but a speed of reaction much slower than in research projects, which envisage pressures of many atmospheres.

The  barriers let the gas through the compartments in sequence, giving up heat to the rock store. The insulation between compartments is to keep the entry compartment as hot as possible, with each compartment in the sequence becoming a bit cooler. The exit compartment will be the coolest.

P4. Heat recovery is via a reverse flow through separate compartments on top of the rock store.

The flow uses a fluid to transport the heat back to the house – possibly water but probably air from the outside (after heat exchange with stale air from the house). The reverse flow starts at the exit compartment of the flue gasses and proceeds towards the entry compartment but is drawn off at a stage when it needs no eextra heat. The flow can be on top of the heat store as convection will keep the top of the rock compartments warm.

P5. At intervals a new entry chamber is chosen so flue gasses react with fresher olivine.

And in a decade the 50 tonnes of rock may need replacing.

P6. Spoiler: This probably won’t work but do look. It may have implications.

It shows some of the difficulties of one form of carbon sequestration.

Notes on advantages and difficulties

Olivine is one of the rocks that can absorb CO2.  In the journal Nature,  Rock’s power to mop up carbon revisited, it says:

In theory, one kilogram of olivine sequesters about one kilogram of CO2, but the rate at which this happens can be slow. And the actual efficiency of sequestration will be much lower than 100%, because of the energy used — and emissions released — in grinding and transporting the rock. In some cases, this could emit more carbon than would be sequestered.

Olivine can contain toxic heavy metals such as nickel that could accumulate in the environment. Grinding rocks would produce dust, which might harm human health.

Phil Renforth studies carbon sequestration and minerals at the University of Oxford, UK, and attended the Hamburg meeting. He says that there is a pressing need to conduct more work on enhanced weathering given that carbon emissions are likely to continue to rise, and because of the current focus on dealing with emissions by capturing them from power stations and storing them underground.

Assessment of wood pellet combustion in a domestic stove by Changkook Ryu suggests that flue gas temperature could reach the entry compartment some 200°C above ambient temperature. The maximum temperature should be restricted to 186°C

Thermal capacity of a 50 tonne store

The stored heat is about a fortnight’s heating load for a well insulated house.

CO2 and energy from woodchip burning

Volume of the heat store and its CO2 capacity

As 2.75 tonnes of CO2 are produced by burning 2 tonnes of woodchips each year. If the whole of the 50 tonnes of olivine were to be consumed by the reaction, the rock should be replaced every 10.4 years.

In How much heating does your house use, Ovo Energy say

In Energy consumption and Passiv Houses, Matthias Grätz of the Baltic Environmental Forum reports that Passiv houses have heating demand of less than 15 kWh/m²a. That is 1275 kWh per year  for an 85m2 house. He also says

Low-energy houses — that is, houses that have an annual heating demand of between 50 and 70 kWh/m²a — are becoming the norm in new constructions.

Transporting 50 tones of CO2 absorbing rock to has several problems. Emissions cause by transport is one. TheGreenRationBook gives the CO2 cost of freight transporting a tonne of material by different modes as

Can the problem of contamination be flue gasses within the rock store be resolved.

It is very likely that the rock store will need maintenance so under the house might not be the ideal place – perhaps underneath an outside patio?

Speed of reaction of olivine with CO2

Whether the reaction between olivine and CO2 can be made to work satisfactorily under the conditions described is the next consideration.  In a thesis on the reaction, Calorimetric Investigation of Olivine Carbonation as a mechanism of Carbon Sequestration, Chuen Wing Lam gives details of labortory experiments to investigate the reaction. These conclusion says
Due to experimental artifacts, the initial questions raised are not yet fully answer. The results, do confirm that, magnesite formation [i.e. the olivine reaction with CO2] is not as easy as the previous studies have proposed.
That’s disappointing but the paper gives a useful graph showing that theoretically,at the optimum temperature of 186C temperature the reaction proceeds 10,000 times faster than at 25C. 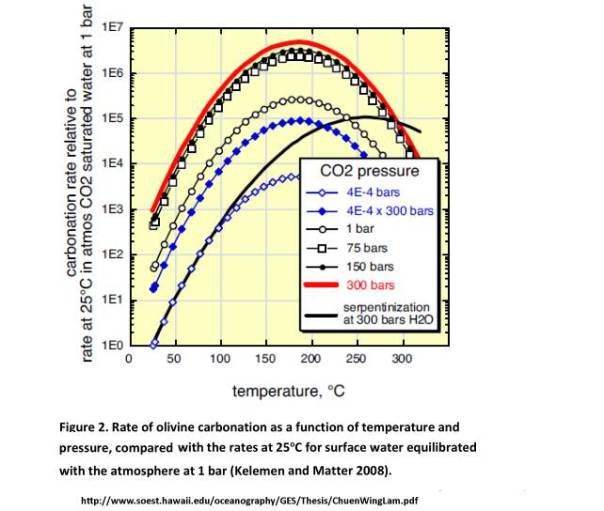 The theoretical calculation also suggests that only 7.20kJ of energy would be generated for every kilogram of Olivine reacted. If 50 tonnes of olivine were to react fully with the CO2 from flue gasses 100 kWh of extra heat would be generated (50000* 7.2kj = 360 Mj = 100 kWh). Over 10.4 years mentioned above for olivine renewal that’s just 10kWh a year and is insignificant compared to the 8114 kWh generated by burning 2 tonnes chipwood a year.

This idea may be barmy.