Tamino’s Open Minds (reblogged below) shows below shows that even without el Niño 2015 was the hottest year on record – but first the Inernational Energy Agency:  IEA Confirms Decoupling Of Global Emissions & Economic Growth 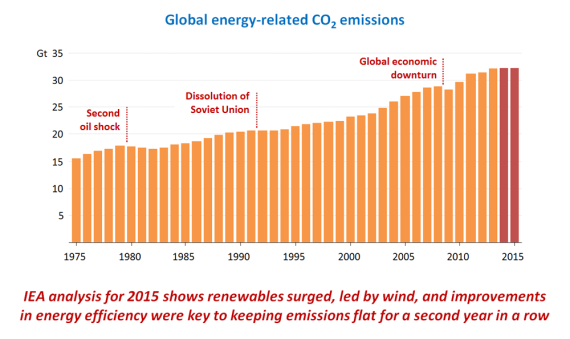 For many years it was assumed that global emissions and economic growth were tied together in an unbreakable knot, however, recent years have seen signs indicating this may not necessarily be the case. According to analysis of preliminary data for 2015 released this week by the International Energy Agency (IEA), global energy related carbon dioxide emissions stayed flat for the second year in a row, while economic growth continues.

However, the US National Oceanic and Atmospheric Administration reported an unprecedented spike in atmospheric carbon dioxide levels in 2015. 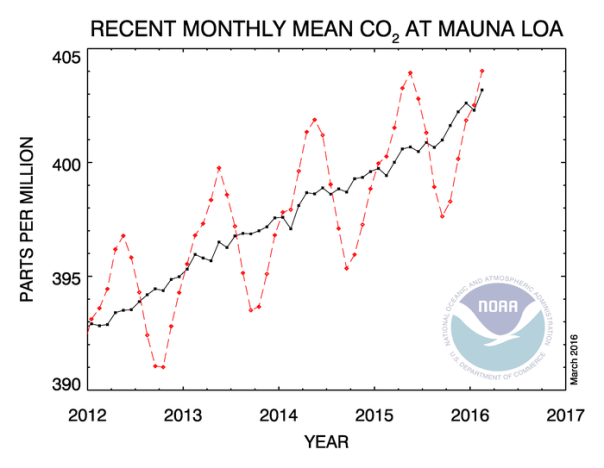 The IEA reports emissions down, NOAA reports CO2 concentrations are up. Strange.

Climate Central gives an explanation from Michael Mann, one of the best known climate scientists:

“This spike is almost certainly due in substantial part to the ongoing El Niño event, which is a fleeting effect that increases carbon dioxide concentrations temporarily,” Mann said. “Carbon dioxide concentrations are a lagging indicator, and they don’t accurately reflect recent trends in the more important variable — our actual carbon emissions.”

But why are CO2 concentrations a lagging indicator?

Is it because of  temperature/CO2 feedback or some other effect? If it’s temperature driven feedback what are the mechanisms? Are they feedback mechanisms that are accounted for by the climate models?

How accurate are the IEA’s emission figures?

Note:  There will be a postscript – possibly with some answers

But here is another excellent piece from Tamino …

I recently showed a version of “el Niño-Corrected” temperature from Gavin Schmidt at NASA. My own calculation suggested that el Niño caused about the same contribution to 2015’s heat as Gavin’s estimate. However, there are some pronounced differences between our calculations.

1 thought on “Correcting for more than just el Niño”